Quantum Cascade Lasers (QCL) are designed for the MIR spectral range from 4µm to 12µm. QCLs enable access to wavelengths which are important for molecule spectroscopy.

Description:
Quantum Cascade Lasers (QCL) are designed for spectroscopy in the MIR spectral range. A schematic description of the gain mechanism is given in the drawing. Opposite to conventional diode lasers, the optical gain is generated via an interband transition of the conduction band. With this band gap design, wavelengths in the MIR spectral region are accessible for spectroscopy applications. 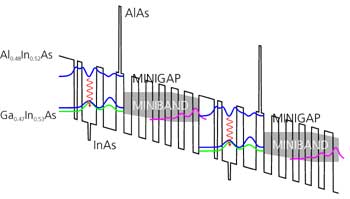 Available Wavelength:
Room temperature CW operational Quantum Cascade Laser are available from from 4.4µm up to 9.5µm. Further wavelength may be available upon request.


Measurements with Pulsed Quantum Cascade Lasers:
Pulsed operated Distributed Feedback Quantum Cascade Lasers (DFB QCLs) show a temperature tuning during the pulse duration. This effect is caused by a change of the temperature within the active area due to the injected current. The benefit of this effect for technical applications is an automatic wavelength tuning. The above figue shows the behavior of a pulsed DFB QCL. The lower trace is a reference curve which shows the transmission ripple of an etalon. The  upper traces show the intensity behavior of the DFB QCL. The dip within the broken lines of the upper trace is caused by the absoption of NO. In summary, a pulsed Distributed Feedback Quantum Cascade Laser System is a ready to use spectroscopic instrument. 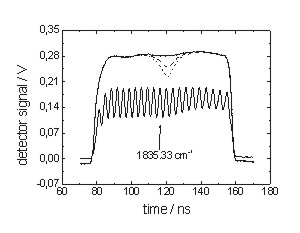 Typical applications for this type of Quantum Cascade Lasers are:

Publications
Sacher Lasertechnik offers a large collection of Sacher publications or publications where Sacher equipment has been used. All documents are downloadable.

Acknowledgement:
We gratefully acknowledge financial support by the BMBF with contract FK13N8020 and the technical support of the project partners Fraunhofer IAF and Fraunhofer IPM.